Why drive when you can have your own car and chauffeur? That’s the philosophy behind Eurobound’s latest private touring itineraries to the Iberian Peninsula.

Eurobound has created two packages–one to Spain and another to Portugal—combining private touring with first-class train travel.  Both itineraries are designed for independent travelers and small groups who want the advantages of an exclusive, pre-planned itinerary and the freedom of being on their own, especially during the balmy fall and winter months.

From Madrid to Malaga on the Costa del Sol, Eurobound’s 10-day “Undiscovered Andalusia” package explores the country cited as number 3 in international tourism arrivals for 2015 by the World Tourism Organization.

Highlights include a private visit in Madrid to either the Prado or Thyssen Museum, plus private half-day tours with licensed, English-speaking guides in Cordoba, Sevilla, and Granada. Also featured are two winery visits in Jerez, flamenco show in Sevilla, a panoramic tour of Madrid, and dinner in Velez-Malaga.

Clients spend two nights each in Madrid, Sevilla, Ronda, and Malaga, with one night in Cordoba.  The itinerary begins with an airport-to-hotel transfer in Madrid for the first two nights, followed by first-class train to Cordoba.  Beginning in Cordoba, clients have a private car and driver at their disposal for the next 6 days of touring at their own pace.

The country flanking the western coast of the Iberian Peninsula had its best tourism year ever in 2015, and is on the road to topping that in 2016. On this 9-day/8-night package, clients can have a firsthand look with their own private driver as they visit the Douro Valley, the world’s first officially-designated wine region; as well as Sintra and Estoril, Portugal’s “Riviera.”

Clients spend 3 nights each in Porto, where the itinerary begins; and in Lisbon, with two nights in between at the medieval town of Evora. A private walking tour of Porto, and a full-day city tour of Evora, complete with a wine tasting, provide insight into these historic towns. In Lisbon, an afternoon walking tour and a private half-day boat tour with drinks and snacks offer contrasting vistas of Portugal’s capital city.

Accommodations with breakfast are at the Pestana Vintage Porto hotel in the heart of town, overlooking the Douro River; Pousada Convento de Evora located next to the Temple of Diana in Evora’s historic center; and the small luxury Pousada de Lisboa in Lisbon.   Also included are airport-to-hotel transfers and train travel from Porto to Evora and from Evora to Lisbon.

For package details on “Undiscovered Andalucía,” visit http://bit.ly/SpainByCar. More information on the Portugal itinerary can be found at http://bit.ly/PortugalByCar. 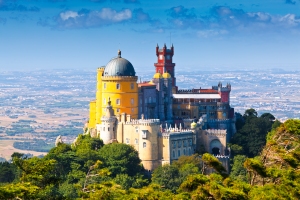