Press Release: Jewish Community Museum reveals the story of artworks “Aryanized” by the Slovak state during World War II, including one Rembrandt

Jewish Community Museum reveals the story of artworks “Aryanized” by the Slovak state during World War II, including one Rembrandt 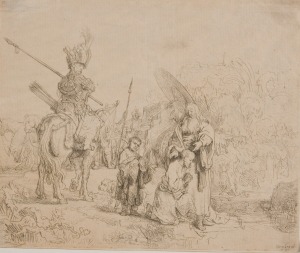 During the Holocaust, hundreds of works of fine art, including painting, sculptures, coin collections and other antiquities in Slovakia were “Aryanized”: taken from Jewish citizens by the state, and sold at public auctions.

A unique exhibition, “The Shadow of the Past”, on show at the Jewish Community Museum at the Heydukova Street Synagogue in Bratislava from 2nd June 2013, shows the dark side of the Aryanization of artworks by the wartime Slovak state. The exhibition has been organized in co-operation with the Slovak National Gallery in Bratislava (SNG).

For the first time ever the public is shown some of the artworks taken from the property of various Jewish citizens of Bratislava. Neither their names nor their tragic fates during the Holocaust are known.

“This project doesn’t seek unnecessary attention or controversy. We simply present the truth about the past in the name of the future, and aim to show the public a relatively unknown chapter of the Holocaust. We explore the depths of this tragic episode in Slovak art history,” said Maroš Borský, the head of Jewish Community Museum.

The most valuable Aryanized artwork presented at the exhibition is a picture by Rembrandt van Rijn, the famous Dutch painter who is considered one of the greatest of all European artists. After being taken, the work was listed in 1943 under the name “In Oriental camp” (from 1641) at a warehouse on Štefánikova Street in Bratislava. It depicts a scene from the Bible and is one of most precious artworks in the collection of the SNG.

The Slovak National Gallery received several such artworks in the early 1950s by means of transfer from other state collections, and it is here that they have remained. Now the SNG has kindly lent them to Jewish Community Museum. Fourteen pictures that were added to state collections were originally the property of Jewish citizens of Bratislava. Seven of the pictures exhibited can be identified quite clearly.

“From the available material it is clear that only a portion of the pieces entered state collections. The rest were probably shamefully stolen. Despite the art and cultural values that this exhibition presents, it is primarily an exhibition about a dark side to our past,” said Alexandra Kusá, the head of the Slovak National Gallery.

Also presented are some rare pieces from the 17th and 18th centuries. For example, the oil painting “Cavalry skirmish” (from 1651) by Flemish painter Pieter Meulener, who was famous in particular for his artistic depictions of battle scenes. The public can also view some older artworks like “Venus mourning the death of Adonis” (first half of the 17th century) by Flemish artist Frans Wouters. He was an apprentice of one of the greats, Peter Paul Rubens, and enjoyed painting lands described in mythology.

One picture with an extraordinary story behind it is a large oil painting, “Miners before going down the shaft / Miner’s prayer”, by Hungarian modernist Július Szent Istvány. It is the only piece in the exhibition for which Jana Švantnerová, curator of the exhibition and leader of an extensive research project into Aryanized artworks, was able to identify the original owner. He was Eugen Bárkány, a rescuer and collector of physical pieces of Jewish culture in Slovakia. Bárkány founded the first Jewish museum, in Prešov in 1928. After the war he built a second collection in Bratislava with the aim of founding a Jewish museum in Bratislava. It is his second collection that is the source of many of the exhibits of the Jewish Community Museum. On grounds of religious sensitivity, Szent Istvány’s work is not being exhibited within the synagogue, but visitors can still see it at the SNG.

“The Shadow of the Past” allows visitors to learn more about the process of Aryanization, and the process by which artworks taken from Jews under the wartime Slovak state were assessed and selected for transfer to state collections. A comprehensive book, including complete lists of Aryanized artworks, coins and medals, is being published to complement the exhibition.

“We intend for the book to act as an effective tool for identifying as many Aryanized artworks that were sold at public auctions and remain in circulation to this day, or belong to museum and gallery collections, as possible” said Jana Švantnerová, the curator and the first person to conduct research into the issue of artworks taken from Jewish citizens.

The Jewish Community Museum opened in summer last year. It  showcases a permanent exhibition called “The Jews of Bratislava and Their Heritage”, taking visitors through dozens of rare artifacts linked to significant dates in the past and present of the community, as well as introducing Jewish holidays and customs to members of the wider public.

“The idea behind our museum is rooted in the fact that the Jewish community has lived in Bratislava for as long as anyone can remember and has always been an integral part of its citizenry. We want to show people a lesser-known side of our town’s history – the story of the Jewish citizens of Bratislava,” said Maroš Borský, the museum director.

The museum is open to the public every Friday from 1pm to 4pm and every Sunday from 10am to 1pm, except on Jewish holidays, between 2nd June and 13th October.

For more information, visit www.synagogue.sk or our Facebook page www.facebook.com/zidovske.komunitne.muzeum.bratislava